What is “animal personality”?

Personality is the trend in behavior over the lifetime of an animal. For example, Animal “A” is more aggressive than Animal “B” during feeding, territory defense, and mating, while Animal “C” is more fearful than both Animal “A” and “B”. An animal’s personality may impact their immunity strength (Bolhuis et al., 2003; Capitanio et al., 1999), their ability to cope with physiological stress (Carere et al., 2010), and the likelihood of performing abnormal or stereotypic behaviors (Ijichi et al., 2013; Cussen and Mench, 2015). 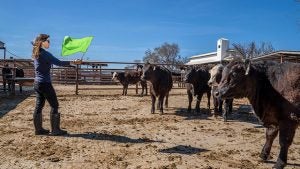 How do you “measure” an animal’s personality?

Given that personality is most clearly expressed in novel and unpredictable situations, behavioral tests are constructed to elicit high-arousal responses. These tests include: restraint, isolation in open field, exposure to novel object, competition for feed, exposure to unfamiliar animal, and reaction to a human approach.

Cussen, V., & Mench, J. (2015). The relationship between personality dimensions and resiliency to environmental stress in orange-winged amazon parrots, as indicated by the development of abnormal behaviors. PloS one, 10, e0126170.